How to go to college 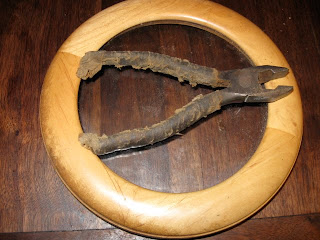 The pliers are by Crescent, although hard use and patina removal over the decades have obscured that fine old company's lettering.
They and some cousins rode the leather tool pouch at my hip from 12:30 p.m. until 5 p.m. five days a week for something over two years at Northern Iowa.
Mornings were devoted to the rhetoric of Edmund Burke, the impenetrable intrigue of Chinese and Japanese history, and Professor Erma Plaehn's unusual understanding of how government really works as opposed to the bull slung by my high school civics teacher.
And delighting in the only academic saint I ever met, Dr. M.B. Smith. He taught me about psychology and the strange behavior of crowds, although his courses were offered through the English department. Once in a while you could get him to reminisce about his days as an irregular in Bataan and Mindanao.
Evenings were sometime devoted to debauchery, sometimes to study, and depending on the state of my finances, sometimes to tending bar at the Circle in Cedar Falls or the Golden Garter in Waterloo.
But the pliers really define those years me, in part because they came with a WW2 Jeep, still in near-military attire. I ranged it topless far and wide across the campus, the tool pouch magically transformed to 1911 leather, filled with a service auto, cocked and locked. My assignment to add an outlet to the house mother's apartment in Campbell Hall became, for a few fantastic moments en route, an order to capture Rommel, alive if possible. The fate of Overlord depended on me.
Note the grips wrapped with friction tape, a wonderful product now harder to find and sometimes revoltingly called "hockey tape" because puck thumpers like to wrap their handles in it. The 3M version goes for nearly five bucks a small roll, about what we paid for a case of the stuff. What you see above, however ugly, has endured since at least the 70s. I am always alert for a box of auction sale junk containing a few rolls. It is to plastic tape what burled walnut is to synthetic stocks.
---
You got dirty working for the excellent Eugene Eddy, foreman of the college electrical shop. You got frustrated. You got tired of working over your head in crawl spaces while breathing the mouse-crap laden dust of a century-old building. But you endured because you liked eating.
It's one way to go to college, and I hope a couple of lads I love don't have to do it like that. But remember, guys, if necessary and with enough balls, you can.
at 11:04 PM

Labels: It IS TOO all about me