The S&W 645 makes me feel so tactical

I almost wish I lived close to a mall so I could dress up ninja and impress some girls wearing tattoos and chewing gum.

The SW is home, admired, and tested. 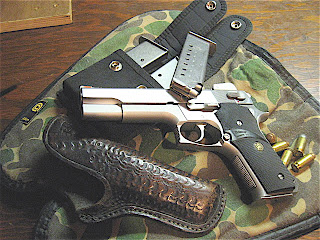 I expected one magazine and got four -- plus one of those high-fashion black nylon pouches that holds two spares back and forth instead of up and down. Tacticool.

I already had the tactically-tooled leather holster --  made it decades ago to a "speed scabbard" pattern for GI .45s. . It holds the Smith nicely but will benefit from a small  sight cutout. I needed to do that anyway for the GI here that carries adjustable Micros.

-- Functioning was perfect with everything I tried, including semi-wadcutters. (The 645 is said to be a garbage disposal unit -- if your junk ammo won't work in anything else, shoot it in the Smith.)

--Excuse-wise, this gun hasn't been shot enough to wear off the proprietary Smith and Wesson burrs. It's rough, especially the DA trigger. The SA pull is nothing to brag about either.

--I am pleased no one witnessed this tryout session.

-- I consider the  hood of a pickup a bench rest analogue. So lean across, get a good two-hand hold, squeeze off factory loads carefully. Gotta see where the gun shoots, don't we?

--In my hands, all over the damned place, that's where. At 50 feet a string of five scattered low left over a good seven inches. I can fix the impact point. I can't even identify yet how to fix myself. Flinch? Jerk? Total cognitive breakdown? Motor skills eloped with O'Reilley's daughter?

--Repeating the hoody position with a load of home made 200-grain SWCs at a peppy 850 fps or so,  the results were better by about half an inch. It isn't the gun, nor the ammunition.

--Switching to the combat mode,  I moved in to 30 feet, took a Weaverish stance and banged off eight as quickly as I could reacquire the target -- a sheet of typing paper. Three in the kill zone,  two possibles, two that would have made him mad, and one clean miss. A couple of repeat strings had similar results.

Excuses: New gun. Very windy (the flimsy target holder moved a little).  Distracted by cows mooing in the nearby pasture. Libby emphasizing that I was making entirely too much noise. Lost concentration worrying about CERN failure to find Higgs Boson.

Labels: Cuz Colt doesn't make a .46, Gimme some guns, Gun pron, It IS TOO all about me

A district court judge has cleared me to own a pistol.

Naaah. I'm not in the system. His Honor is overseeing an estate and has yes/no authority over the selling price of an adequate little pest control device made by Smith and Wesson in the 80s. I petitioned for a 10 per cent reduction in the reasonable asking price, and a writ of acceptance was issued.

It's the minty stainless steel spawn of the Model 59 concept, and after inspecting it I conclude Dan Wesson's descendants learned something about making DA semi-autos (only) after issuing the 59.

Besides, it's in a more noble caliber. Besides again, the magazine holds just eight rounds, so maybe Senator Boxer will start returning my calls. Oh my. It's a spat between my sterling work ethic and my raw desire. Too much actual work staring me in the face to justify the trip, but sometimes a guy's just gotta trust his lust.  See. Palpate. Maybe even buy.

If I go, I'll report.
Meanwhile, enjoy the eye candy.

Real life sometimes shoos a guy's literary muse into a dark corner. It sometimes even shames a fellow into turning off his Apple and taking up tools in the eternal quest to reduce the world's ugliness. Such as: 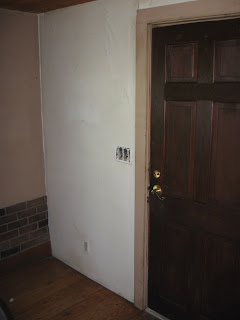 The hideous nature of the wall is not obvious in this photo, but trust me on this one, Sidney. It was awful -- ancient stained and pocked plaster board, a cruddy material at best and worse when installed by a short-order cook in his spare time. 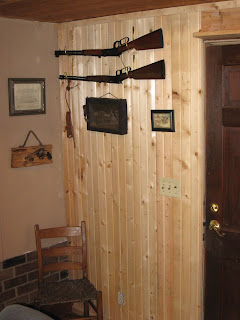 The ugliness reduced, replaced by the Cowboy Corner and Family Museum.  Honest wood holds western dreams in .30-30 and .22LR.  Framed document is a grant of Kentucky land to the first of my line to appear in the New World -- just in time to do battle with King George in the Virginia Continental Line.  The chair is from Missouri's Salt River country, c. 1900,  built of native hickory sticks and splits by my GG grandfather's hired man.  Other knick-knacks -- especially the hand-tooled holster --  memorialize a little sister who died too young.
And that's most of what I did this week instead of trying to write.  I am soooo pleased with myself.

However, I do, in fact, realize that it's time to get back to life's most noble calling, savaging the asses who govern us.
at 10:49 AM 1 comment: Links to this post

Labels: Gun pron, It IS TOO all about me

A small part of the American legacy; may we deserve it

I like to think it was taken by a U.S. PFC from the remains of a particularly brutal SS officer on this date 67 years ago. 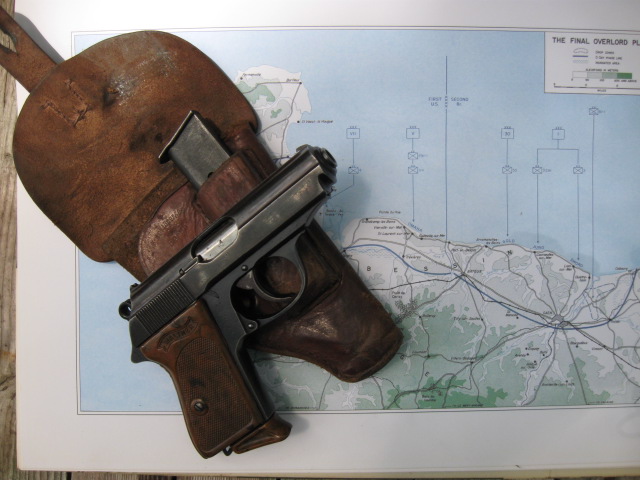 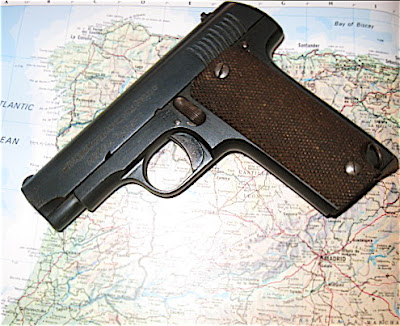 Or, as the auctioneer announced it, 7 and, uhhh,  point 65 caliber, causing just enough confusion  in the country crowd that the gavel fell at $60, tickling the buyer to no end. At least it looks something like the Browning that inspired it.

It's a Model 1916 Astra patent, made by Esperanza y Unceta in Guernica, up in the Basque country, probably prior to the first great depression, the one  before this one. Nine in the magazine.  The barrel is marked "Hope," creating a certain insecurity about the confidence of the makers in its objective utility.

The apprehension was unfounded. The new owner might even have gone up to $100 on pure speculation that it was one of the good Spanish pocket pistols, and he would have won the bet.  Frittering away a remarkable sum of money running factory ammunition through the new toy, he experienced no malfunctions  and minute-of-thug  accuracy over the length of an average living room.  Or, as he remembers the session that cold afternoon,  groups of about four inches at about 25 feet from an F150 hood rest.

It hasn't been shot since, not so much because he agrees the .32  is a little light for heavy situations, but because of the reloading hassle. It tosses brass to Hell and gone, making the tinies hard to find. And he can never get used to placing the bullets over the neck with a pair of tweezers.

But it's nice enough to keep, and he'll probably pop for more practice ammo. Who knows when he'll need something small enough to slip under his cummerbund?
at 10:22 AM 8 comments: Links to this post 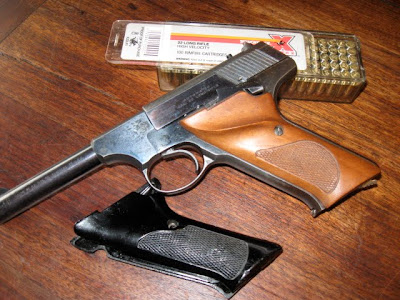 Breda doesn't even know I owe her a favor. She needed a few rounds of semi-oddball ammunition. I pawed through one of my junk boxes to see if I could help (couldn't, really)  and stumbled across a set of as-new walnut  "target" grips for the recently acquired Colt Huntsman.  They're the kind of quality guys like Gil Hebard used to sell.

I didn't know I had them, and if I had not been mining  .38 SW rounds it might have been months or years before I tripped over the grips.

They look and feel right, so I'll leave them on for shooting. The  plastic originals get cached  against the unlikely chance I'll want to sell or swap her to a Colt collector. Those guys are daffy for ponies.