As World War Two segued into Korea, a hot spot in the Cold War, I was almost old enough for the Boy Scouts and all those camping adventures. I decided to be prepared, so I haunted the war surplus stores. They were jammed with left-over field gear, and even the poorest kids could afford it. A dime would get you a canteen. A quarter would buy an entrenching tool and a buck both halves of a pup tent.

My camping kit was so composed. We argued about which was neater, official Boy Scout stuff or the equipment "our guys" used to wipe out the dirty Krauts and Japs. The latter was infinitely cheaper and hence, in  those days of small incomes, won the argument.

No one ever thought of "collecting" web and leather gear. How could you imagine collecting something as plentiful as dandelions? You bought the stuff and used it, period.

Flash forward a few decades and check the 21st Century prices  for 1940s militaria and note the awe with which some identify the stuff as jen-you-ine World War 2  relics. The louder and more precisely pronounced the "jen-you-ine," the higher the price.

I started noticing the trend early enough to take small advantage of an unsettled and asymmetric market and started picking up the stuff at garage sales and auctions. A buck here, two there,  up to three for decent 1911 holsters. Over the years the stash grew big enough to outfit a fire team (roughly two privates and a PFC or junior corporal), then, most of a squad (roughly three fire teams under a buck sergeant).

And I started taking a liking for and interest in all that canvas, webbing, and leather, so kept it up. If I live long enough and don't run  out of storage space,  I may someday correctly fancy  myself able to supply a platoon.

Especially if I keep going to gun shows in semi-northern Minnesota, home of the clueless. 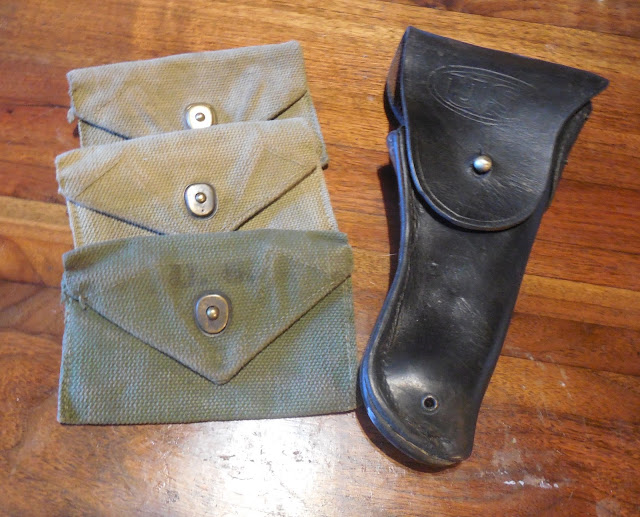 Five bucks for the .45 holster, two each for the first aid (and compass) pouches. An 11-dollar total for a dandy addition to my pile. The holster especially tickles me because it is much better than the picture shows. It looks warped because someone set heavy stuff atop it, but the lack of inside wear suggests it hardly ever housed a pistol.

A small geekout for serious aficionados:

The holster is undated, made by Gratton and Knight, issued in russet, and blackened later, suggesting manufacture during or after the big war and possible re-issue for Vietnam,  by which time most of them were issued in black.

The top two pouches are pre-war or early war. The color is OD3. The bottom example is later, perhaps 1943 forward, in OD7.  (OD=olive drab). They're almost universally called first-aid pouches and were designed to hold a Carlisle bandage. At some point the Army decided they were fine compass carriers, too.

And that's what I did on my vacationette last weekend. Doing it in company of two fine St. Cloud kids, who are not among the clueless,  just made it all the more pleasant.

Boehner and the Asses

I have no more respect for John Boehner than for any other institutional  politician. Nevertheless, he was one of the better tacticians of the breed. A stern dedication to ideology is admirable, but Boehner fully understood politics as the art of the possible.

The instant issue is giving the left wing a massive political talking point: "The Republicans shut down the government, making you miserable, just because they hate women who want to talk to Planned Parenthood and maybe undo the result of a few moments of passion."

Boehner is as "pro-life" as anyone, if that's a criterion for "good" conservatives. He just saw the results of a shutdown drama as a huge political  loss for conservative (and, to some degree, libertarian) Americans.

It took the stage-surprise of his resignation to reveal the idiotic contempt in which deliberative politics is held by some of his reluctant stable mates. For instance:

...and Rep. Tom Massie of Kentucky said the speaker "subverted our Republic.I think it was inevitable," Massie said. This is a condition of his own making right here.

Ass: Noun describing persons of mean disposition, prone to seek the limelight via personal slurs on better men than themselves. Hello, Tom.

This Planned Parenthood crisis, acted out in the Center Ring, is probably the  most valuable thing that has happened to that organization in decades. It couldn't buy such attention for any sum of money. A massive slice of America now believes the issue is shutting PP down.  Not a chance.  All the pro-lifers are demanding at this point is that their abortion program should not be paid for, directly or indirectly, by taxpayers who hold a strong moral position that abortion is sinful.

The sin of the matter can be worked out among the factions -- those who long for a return to the back-alley coat hanger, those who chirp that abortion is just one more means of benign birth control,  and the more rational thinkers somewhere in between. Just leave the IRS out of it.

"A nickel ain't worth a dime any more."

If you like semi-artificial excitement, this has been an excellent week to read the financial press carefully. The American central bank will pop off a quarter-point interest rate increase this afternoon, or it won't.

More expert words than we can count with a Cray have been expended on predicting one result or the other. Closer to the real world -- but in fact not very close at all -- more money than you and I could possibly imagine has been gambled.

As a public service I offer my own conclusion, to wit, I don't know how Janet Yellin will massage the Federal Funds Rate at 2 p.m. today, and I have arranged my investments accordingly by doing nothing.  The inaction is based partly on fear of being wrong and losing  capital, probably enough of my hard-won savings to pay for  a day or two of Janet's fresh-squeezed orange juice served by a smiling civil servant in a starched white jacket.

And also partly by general disgust that our official medium of exchange still has no objective value beyond the promises of politicians and the guesses of tea-leaf readers  who happen to work at the Federal Reserve building rather than on the carnival  midway.
at 10:17 AM No comments: