...and I'm covered under the Americans with Disability Act.

I learn from an old George Will column that I am likely afflicted,  per the American Psychiatric Association manual of disorders,  with a DSM-IV ailment. Specifically it  is oppositional defiant disorder  characterized by displaying a pattern of negativistic, defiant, disobedient, and hostile behavior toward authority figures.

It means that when I yell that Hillary is a harridan, the kind of thing to which men are pleased to be unmarried, I can't help it.

I never thought of it as a disease under ADA.  I thought I was just fulfilling my anti-statist duty by  expressing a pertinent and verifiable fact. So I am slightly disappointed to discover that I'm merely nuts.

Still, I guess there's the compensation of knowing that if I fill out the right form I can probably get some bennies.
---

I mentioned Will's vocabulary a while back, and I found another dandy.  I had to look it up.

It means hissy fit, as in Mrs. Clinton's behavior when questioned about Benghazi. Or learns about interns.

They are to transportation as the Colt 1911 is to weaponry, and they never fail to trigger my acquisitive mania. 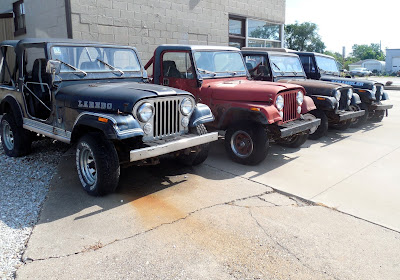 There were 13 of them, including the lust object called Scrambler. Of which, below, the interior of the blue one at far right. Just too tired. 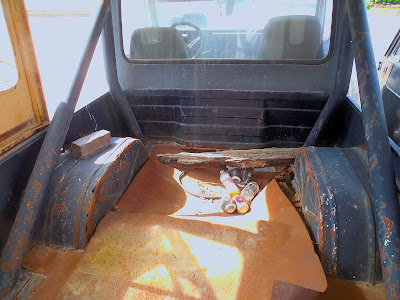 Or how about a nice flat fender Willys from the 40s or early 50s? 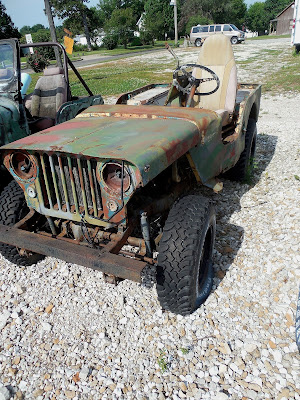 Like the Scrambler,  just too tired. The engine was missing and the transmission stored on the floorboards.

No one was around the place, else I'd have undoubtedly asked prices, then mentally added restoration costs of  $goodgawdafriday  before deciding there are other toys which would give me more pleasure per buck invested.

I am writing trivia yesterday and today, little more than pretty pictures captioned. The banality must suffice until I work my way into  something more about a trip with a purpose; tracking my kin and my larger people, the Scots Irish, the redneck hillbillies of whom I am a recent incarnation.

I'll probably get round to saying something prosy about it. For now leave it this way:  Anyone who walked the Wilderness Road from the foothills just above Tidewater Country, stumbled on and through the Cumberland Gap, and followed  Boone's Trace up to his first fort was one tough son of a bitch. Or daughter.  From seven generations forward, here's to you Grandpa John and Grandma Christina. 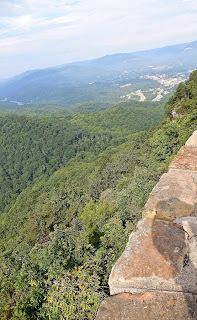 Labels: Far Places, It IS TOO all about me, Ludditical delight

What I saw in America

Beautifully restored and maintained atop "The Pinnacle" overlooking the Cumberland Gap. 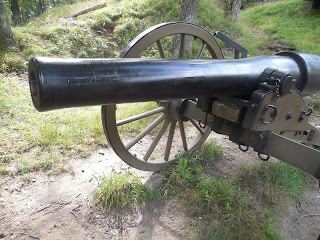 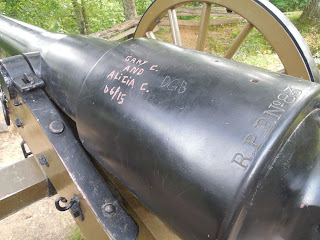 If the gods are just, Gary C. was stricken limp forever and Alicia C. became permanently frigid. DGB should be let off with multiple public horse whippings and a court order barring reproduction.
at 7:15 PM 1 comment:

Washington says it's time to update the obsolete M4 carbine in its various passé costumes.   RFPs and bids and spec sheets and dream sheets and I don't know what-all are flying around the Pentagon and all rest of the Military-Industrial Complication.

Okay, look, I admit modern warriors know infinitely more about modern warfare than I do, and they can point to many glorious and clear-cut military victories in the past 40 years or so to prove it.

But sometimes a fellow wonders.

According to this guy, one of the many new specs will be "Adding room for more attachments on the carbine (e.g laser sights, flashlights, bipods)."

Is that the limit of the desiderata, or is the "e.g." meant to include other handy enhancements? How about a barrel-attached manifold to heat C-rats?   A flip-up,  lighted makeup mirror? Other e.g.?

(Off-stage voice) C-rats, you idiot? They haven't been issued in at least two generations. Shaddup!

Good point. The last OD can of lima beans was issued when the soldier's weapon was considered a rifle, a battle weapon, instead of just another MOLLE load-bearing gizmo. My bad, and I'll drag my sorry old butt down to the VFW club and whisper my opinions into a  50-cent draft Grain Belt while the guy next to me brags about potting NorComs at 800 yards with his Garand up near the Chosin Reservoir.

I tried to raise my children to be absolutely cynical about anything and anybody having anything to do with governments. They were urged to believe that virtually any public-trough functionary, from the guy who collects the garbage to the guy who lives in the White House, is in some part a blend of leech and thug.

One summer in Canada, my teachings took a hit. We were on a long camping trip through northwest Ontario,  bedding down sometimes in the wilderness, sometimes in the superb provincial parks.  In one of them (Rushing River Park, I think)  I came briefly to love bureaucrats as represented by the park staff.

Checking in, we were taken with the youth, attractiveness,  and personability  of the young men and  women assigned to collect our money,  help us select a site,  and generally make us feel welcome. The girl taking the camping fee was a special delight and not only because she was decked out like a like a grown-up and alluring Brownie.

There was some confusion about the exchange rate. Ontario's parks were perfectly willing to take U.S. currency, but there was a small discrepancy between the actual charge and the greenback I handed over. It amounted to a few cents in our favor.  I waved it away. She wouldn't hear of such a thing and disappeared for a minute or two,  long enough to collect some coins to make it just right. Then she apologized for delaying us. I was about ready to inquire about the immigration laws.

All of which is to say I had a mild love affair with our northern neighbor.

Maybe that kind of cordiality was laid on strictly for the tourist trade, though somehow I doubt it. On that trip and some others back in the day, I always found Canada and Canadians a congenial bunch embracing a live-and-let-live attitude and celebrating their occasional outbursts of odd-ball nonconformity.

Maybe Canada is turning,  like its Mother Country, into a meek bastion of rampant  nannyism where any deviation from officially prescribed behavior is grounds for police action.

I mean, c'mon, how much danger could this guy pose to public safety?  Suppose that everything failed at once, catastrophically. All the carnival balloons pop. His parachute doesn't open. He plummets to earth, a willing victim of his own free spirit, his sense of fun and adventure, his refusal to march in the drab gray line with Winston Smith.

The report leads us to believe everyone Calgary was gawking at this man aloft. Certainly they would have had enough warning to evade his plunging body and lawn chair, probably even enough to flee the disgusting splatter.

I wish someone with clout in Buckingham would cut and paste this and make sure Her Majesty sees it. We could then dream that she agrees with us that a formal Royal Pronouncement is needed.

It should read, "WTF is happening among Our Subjects? Doesn't anyone remember Jim Tytler?"

Labels: There will always be an England. So what?

The Art of the Lede

While not totally reflective of the story, this AP lede is the best I've seen in several days of media Odes on the Grecian Burn.


FRANKFURT, Germany (AP) -- Greece is at the last chance saloon, thirsty and out of credit. Next stop could be the badlands of euro exit.

Silver Sex in a Greek Cave

(Inspired by a morning AP headline saying Greek politicians  are about to "cave in" to the people who loaned them money and now want it back. {This headline does not necessarily represent reality}.)

(And also inspired by memories of Melina as Ilya, who, as previously reported in these pages, is the last known Greek person to work cheerfully and diligently through a six-day week.) 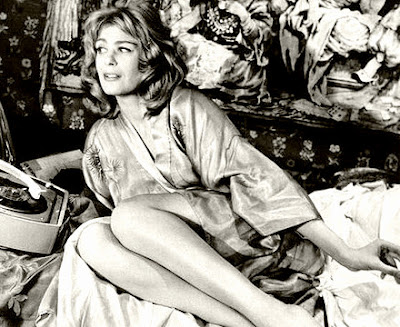 An independent dispenser of an honest product at at honest price, the hallmark of free market economics; rare enough to justify at least one repost of our heroine.

I liked Ilya and even Melina who became a nagging left-wing political bore, much like our own Susan Sarandon. For reasons which may suggest themselves, I have forgiven them both. Those reasons have nothing to do with their value as conversational partners. 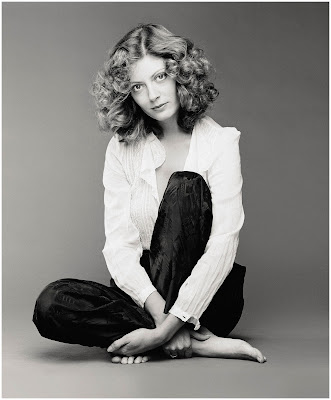 All this leaves only the obscure title reference to "silver" to be explained. Easy.

Wouldn't it be nice today if we were in Pireus  with a bulging sack of pre-1964 U.S. silver coins? Or even some of those wonderful silver Drachmas which circulated in Athens up until the time when Greek politicians, like their American counterparts,  in cahoots with amoral bankers, found out that the drooling masses could be hoodwinked into accepting pieces of paper and clunky zinc medals in place of actual money.

We can think that over for a while and commiserate with the poor Greek worker (forgive the oxymoron) standing forlornly outside the barricaded bank where his "money" is, fidgeting with hands in his pocket, where it is not.

Then we can forget it because we live in America, a place ruled by Golden men and women who would not for a moment consider issuing and using value-free scrip and and pot metal discs, backed by nothing more than their fingers-crossed promises.