But it was a serious thought for about 15 minutes last spring in Terril, about a half-hour away, a declining little town. My ideas were (1)  it would be dirt cheap and (2)  I could  do a quick and dirty rehab and use it for storage and a private indoor range. 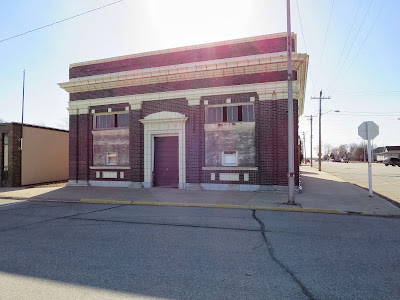 The first notion was correct, the second not. Even at the auction price of about $2,000, she was just too tired. No intact windows, no mechanics, electricity, or plumbing, needing a roof job and a new main floor, joists and all.

It was all just too much work and expense, even for the smirky pleasure of answering the   "What  do you do?"" question with, "I own a bank."

Labels: It IS TOO all about me

Home of the real Sand Pebbles

Just clearing my desktop here. For some reason or another I once thought some readers might be interested in what is said to have been McKenna's real-life inspiration for the San Pablo. 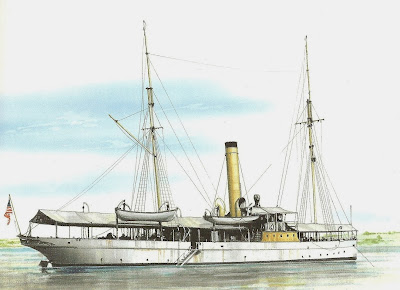 Oh, to have been a China sailor before the Japs, before Mao, before Chaing.

Okay. I know it's just a Carcano you bought from Joe Bob for eight bucks one Saturday night in the 60s when he was hurtin' for cash to take Emma Lou to the drive-in picture show. 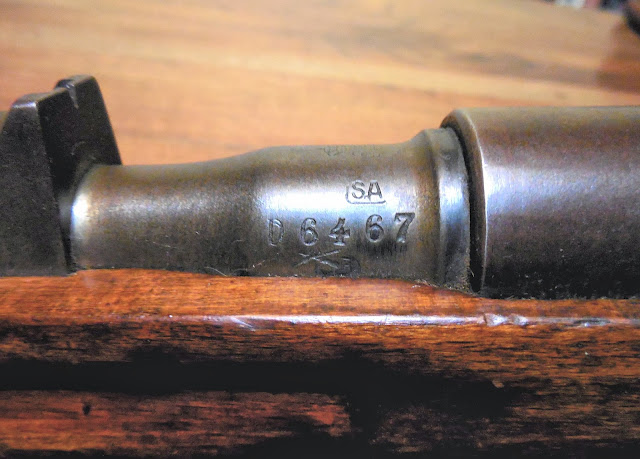 The "SA" stamp identifies it as one of the Italian goofs in 7.35x51 (or 52, sometimes) that Mussolini palmed off on the Finns for their Winter War. The SA ("Suomen Armeija" or "Finnish Army")  didn't much like it, but they were desperate and issued most of them to REMFs. Still, they're mildly scarce and a nice piece of World War 2 history. Too nice to run through your woodshed chop shop.

At least you didn't fool with the metal, meaning I need to find only a stock and furniture to have a "correct" if not fully authentic rack mate for the other iron from the 1939-45 horror.

Errrr. Forty bucks when the hammer fell Saturday, if you must know, and that's why I'm grinning, regardless.

As I may have mentioned, occasional insomnia has its rewards. I conked out early, exhausted by  a harrowing 70 minutes of telephonic registration for a new health insurance policy. I woke up about 2 a.m. You know the feeling. "So much for this night's sleep. What the Hell do I do until sunrise.?"

So I turned on the teevee. Lo and behold, there is Lloyd Bridges jumping off a boat. I couldn't have been more pleased.

A long time ago I had just returned to San Diego from my second WestPac cruise.  Loafing round my girl's apartment I'd occasionally glance at her 11-inch black and white television receiver and happened to catch an image of Lloyd Bridges jumping off a boat.  I couldn't have been more pleased.

While I couldn't claim that my girl possessed the center-fold sightliness of  Jan Harrison, Lloyd and I did share something. We were divers, SCUBA experts in the wonderful years before every vacationing data entry clerk from  Exit 12, New Jersey, became a "certified(!) diver" after a three-hour session in a Nassau hotel pool.

Strictly speaking, "expert" somewhat exaggerates my skills in those days. I was as adept as a guy could get after maybe ten or twelve wet hours, not all of them with breathing gear.

Westbound destroyers called at Midway Island en route from Honolulu to Yokosuka for fueling and one short day of sightseeing. That was plenty. When you've seen one Laysan Albatross, you've see them all. The same goes for long, hot air strips hearkening back to the rotary piston era.  So, on the second trip I checked out mask, snorkel and fins from Special Services and went reef gliding. Hooked.

In the middle of the six-month cruise we generally spent a few days on Guam, the world's second most boring island (after Manhattan).  The morale station there had tanks and regulators available, and all you had to do was sign a chit certifying that you knew what you were doing. It was my first and only lie, but I managed to survive a couple of afternoons on the pretty reefs. Later, back on Civvy Street, I undertook to actually learn something about it and, eventually, wound up with an instructor's card from the YMCA and some other documents from PADI and NAUI.

All of which is to say I have never gotten over the miracle of artificial gills, of going down there where, when the fish blew bubbles at me, I could blow back.   Just like Mike Nelson of Sea Hunt, which you can see on THIS channel.

I'm aware that among my readers lurk a few degenerates who prefer more revealing images. Shame. This is a family oriented blog. Couldn't find one anyway.

Labels: Far Places, It IS TOO all about me, Women With Clothes On

It has already begun, the annual Niagara of tears for the loss of our Great Leader, a grieving this year made more significant by one of the magic-number anniversaries. It happened fifty years ago come Friday.

I am prepared, handkerchiefs laundered and stacked at the ready. My screen glows with multiple Windex treatments so I miss no detail of the video tributes to the man who illuminated the planet and would have saved it but for the mischance of death.

Already written and on the blog queue is a finely detailed account, some nine thousand words after the most brutal editing and condensation. It explains to a breathlessly awaiting world exactly where I was and what I was thinking on that tragic Day the Music Died.

It is most somber.

Tear-mongering television has about turned the Tacloban disaster into just another ho-hummer, something like a sudden rain storm which ruins Mrs. Abernathy's garden party.

To wit: The CBS teevee news correspondent this morning -- on the spot with disaster in the background -- announced in his lede that while food and water were being delivered to some 100,000 people, "The needs are still enormous. It can take five hours to charge your cell phone."

I weep for the poor victims forced to endure hours without the comfort of a ring tone, but I rejoice in the keen sense of proportionality displayed by the United States electric news industry.
at 8:57 AM No comments:

I'm taking a break from hands-on life this morning to note the upcoming address by President Obama about a "fix" for the problem he promised would never occur. You'll recall it. "If you like your current health insurance, you can keep it." Period. No qualifications. Uttered as he touted his version of English health care for America.

(Leading to a side question: When is the last time you heard of an American flying to London for for treatment of a rare and complicated disease? But I digress.)

Of course any fix he proposes won't work, so I won't get very interested in its details. More interesting will be his stab at restoring his credibility. I suspect what ever he has to say will play well enough with mouth breathers and gum chewers still entranced by the visionary rhythm of his Hope and Change sermons.

For the skeptics among us,  I expect the actual revelation will be confirmation that this inept man reached the limits of his competence as a Chicago ward heeler, albeit one who went to the Ivy League to learn how to string the comforting  buzz words together.
at 11:42 AM No comments:

So what does The Admiralty lose next -- rum, sodomy, or the lash?

As if my week hasn't been bad enough, my friend JAGSC has just invited my attention to the end of ship building for Her Majesty's Royal Navy in  Portsmouth. A very long era ends, from Henry VIII's fighting carrack Mary Rose to the aircraft carrier Queen Elizabeth, due for sea trials year after next.

That's a lot of imperial scurvy and lime juice punctuated by routine entertainment with the cat-o-nine-tails and the occasional stiff-upper-lip extravaganza known as flogging around the fleet. Too, it is said that Portsmouth  developed the first  practical yard arm which could bear the weight of an insolent Jack Tar and half a stone of stout hempen line.

I mourn the end of most traditions, but as the direct descendant of an Irish-American who shot at Redcoats 1776-1783, I suppose I should feel smug about this one. Final victory of a sort and all that. Maybe.

The Royal Navy isn't what it used to be, but up through the middle decades of the 20th Century it helped serve a personal purpose for the likes of me.

The socialist goodthinks who, post-Churchill, captured British politics retained an urge to sail around and wag their (now empty) cannons at commies and wogs. That gave Yanks like me an excuse to put on bell bottoms and dixie cups and go to the Oriental seas, loaded to pull Albion's nuts out of the fires again.

It wasn't a terribly bad way to come of age. As Mr. Kipling explained, "...the things that you learn from the yellow and brown  ...".

I'm humming some Oscar Brand here, but already having offended about everyone I can think of, I won't compound my sins by typing out his lyrics.

JAGSC remarks that Lord Nelson may somewhere be mounting a "spirited" protest. :)

Just a place holder here. I'm fully occupied reducing logs to firewood. The splitter works like a dream, even if it looks hardly at all like a product from The Sharper Image.

I'm pleased to have it, but I fear the wood will not burn so brightly. It will lack the seasoning sweat, the hand-splitter vulgarities hurled at knots and school marms, the indefinable charm of nature put to good use without the intervening stink of gas and oil. Still, as I say, it's a good thing to own for a man approaching the years of his maturity.

I'll be back before long, and among the first orders of business I intend to challenge Rand Paul to a duel.
at 2:19 PM 3 comments:

A place to unload

I generally avoid posting my most sincere, deep-seated, passionate and personal  feelings on the Internet. In the first place, they're private. In the second, almost no one gives a crap.

I make an exception this morning beause I am powerless to hold it in. To wit:

Labels: Domestica, It IS TOO all about me
Newer Posts Older Posts Home
Subscribe to: Posts (Atom)