In truth, "gunsmithing" is a word too grand for what goes on around here. "Often successful tinkering" is more honest.
Unfortunately, even light tinkering ambitions sometimes require a vice -- a cursably in-the-way beast is when not in use. I put up with them permanently installed in the big shop, but the gun room bench is too small. Hence this morning's pre-sunrise project: 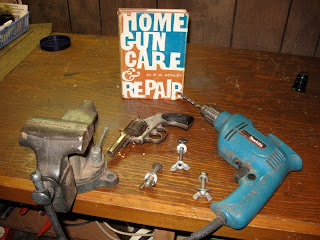 The nearly self-evident trick here is use of through bolts and wing nuts to attach a small machinists vice tightly but temporarily to the bench I use for reloading and small "clean" gun work. You can mount or dismount it in less than a minute.
The ploy won't amaze many of you, but it makes an excuse to post a picture of a neat old Saturday Night Special and one of St. Ackley's books.
The revolver is "The American Double Action," in .32. Others were made in .38 and .44. H &R built some 850,000 of them c. 1883 through 1941. This one needs a couple of parts, and we're scrabbling through the junk box.
at 8:55 AM