We begin with the gun, a Findy Sickle piece, celebrating its 111th birthday this year, born only three years after William Randolph Hearst started the Spanish-American war in order to allow Teddy Roosevelt to become president. 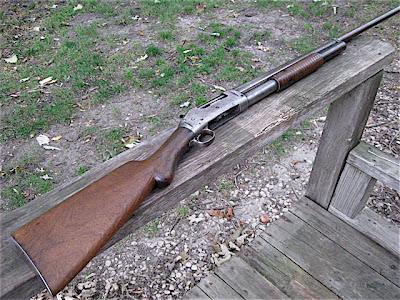 Winchester Model 1897, serial number C158xxx, one of about one million examples of this design from the brain of John M. Browning, PBUH. It is long-tomish with a 32-inch barrel, full choked in 12 gauge. (Boys, ya wanna see my bran' new goose gun?)


I've owned a few of them over the years, generally picked up as lagniappe  in multi-gun swaps or from folks who just didn't care to have rusty old guns cluttering the place. I bought them cheap, enjoyed them for a little while, and swapped them off. The only real attraction for me is the connection with my earliest days in the field, the times before I was allowed to carry a gun, that awkward stage when a little  boy was trusted to walk along in the line of  party-hunting adults as a sort of bi-pedal pheasant flusher, actually cheaper than a good dog because the folks were stuck with feeding me anyway. A fair number of the adults carried Model 97s. The majority, armed only with single-shot H&Rs  and the like, were jealous of the six-shot firepower. We bare-handed kids were even more so. 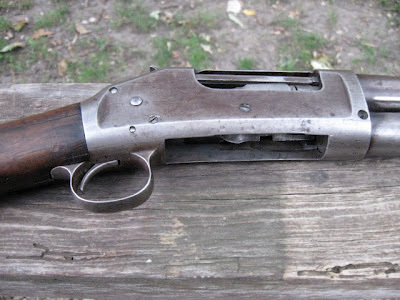 One other thing. I loved the exposed hammer, and I still do -- on any firearm -- despite their snagginess and mostly mythical safety flaws.The ability to see at the briefest glance that the gun is ready or not ready to go bang is part of my personal   security blanket.

(Isn't that a whole lot of wind about a common old gun, Jim? Especially one pretty well clapped out from a century of rattling around in duck boats and Model-A trunks?)

Yeah, I guess so, but it gives me a chance to bloviate on the transaction which brought her to the Camp J Armory.

We were at Cabela's in the northern Minneapolis slurbs. It's sort of a tradition when the family gathers in St. Cloud. We never buy much, but I do like wandering aisles and marveling at how many thousands of dollars folks are urged to spend in pursuit of the simple outdoor life. (Remind me to report on the absolutely indispensable $75 walking stick one of these days.)

This time, Number Two Grandson and I went directly to the gun section. The first thing catching my eye was the '97, and I idly checked the price tag. Ahem. $99?? I can make a buck on that. Or maybe, at that price,  it would be nice to grace the wall under the Maynard Reese (Nine Travelers --Canada Geese  708/950.)

I took it to a clerk who popped the trigger lock so I could see how bad the action was. The forearm was chipped, and its screws to action bar were missing. That's it. It would go bang. I frowned disgustedly anyway. The clerk said, "Maybe we can do something about the price."

So I pretended to examine it in greater detail, sighing knowledgeably while finger-tapping the deeper dings.

He directed me to the computer  where I entered the 4473 information, permitting the Cabela's Bureaucratic Compliance Officer to check me out with Eric Holder and, not so incidentally, with all of the credit bureaus. Cabala's is smart. The same information that squares me with the BATFEIEIO justifies me with the usury industry, but I didn't think of that at the time.

The paperwork was cleared and I reached for "money" in the form of Federal Reserve Cartoons. Mr. Clerk stopped me. "Sir, you have been pre-approved for a Cabela's Visa card. "

And that's how I walked out of a giant super store with a $50* Model 1897 Winchester and a brand new credit card with a limit astronomically high  considering my unimpressive personal circumstances.  In this narrow matter, I am even smarter than Cabela's because the plastic is and will remain TDY in a forgotten drawer corner.

Minor gunsmithing to ensue, followed by a nostalgic bout of scattering small pieces of toxic lead around the countryside. It's okay. No condors in these here parts.

*(Plus, of course, $3.50 for the state which, I am convinced, will use the money to further its efforts to persuade every Minnesota driver he or she is operating the only vehicle on the road.)

I just looked in the mirror, and I'm actively engaged in either photosynthesis or raging jealousy...

Cheap Saturday night special, or that is how it will be described on CNN. JAGSC, also verde.

One can never have too many Browning designs in the safe, on the wall, in the holster ....