Storms, then and now and leggy

I fell asleep reading about one storm, 160,000 years ago,  and woke up in time to experience another one, still going on.

As my body succumbed to the fatigue of more work (actual work; moving matter) than I'm accustomed to lately, Donald Goldsmith* was telling me about Supernova 1987A. It actually happened sometime around the era when homo sapiens was killing off, and perhaps eating, competing bi-pedals, but it was far away.  So far that the radiation didn't knock on our door until February 23, 1987.

And, rude Earthlings that we are, we turned out the lights, drew the drapes, and pretended not to be home.  The neutrinos were left to their wanderings.

Of course, everyone these days knows something about neutrinos, a product of exploding stars. They are notable for being almost non-existent in a material sense. No gravitas. But they are blessed with a blind and driving energy, and if you want to explain this to your kids by an analogy involving Barack Obama, it's okay with me.

A few days later the rest of the rays and particles from the explosion started calling. This time we were paying attention. The most noticeable result? Hundreds of ambitious astronomers and physicists rushing about and tripping over one another in a mad dash for research grants.

That part of Space Storm 1987A is calming down, as is the great Camp Jiggleview Deluge of June 16, 2014. The most noticeable result of this one will be the Commandant's activities tomorrow. Moving matter, downed burr oak branches and assorted small debris blown around here and there.

There's no real damage, just a certain annoyance that my recovery day will be delayed. I'll entertain myself by photographing the foot of so of water standing in the shallow ditch in front of the private Camp Jiggleview Forest. It's happened before, a great big puddle that goes way in a day or two.  Of course when I'm telling my Green Party friends about it I use the term "rain garden."

All that done, I'll start getting ready to replace some blown roofing on the shop-office-guest room building.  So (sigh) If I seem a little surly for the next few days, please be understanding and kind.

I'd have preferred this one, but not even exalted Commandants get everything they want. 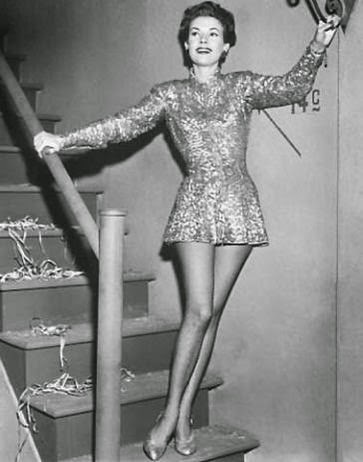 *In "The Astronomers" 1991, ISBN 0-312-05380-0. (It's a little dated, of course, but still a rather useful explanation of cosmology for lay folk, especially when read with Bryson's "A Short History of Nearly Everything." If I'd read it before Hawking's two popular books I might have understood more of what he said in fewer than three readings.)

Labels: Be-Bop Obama, How I save the world, It IS TOO all about me, Women With Clothes On