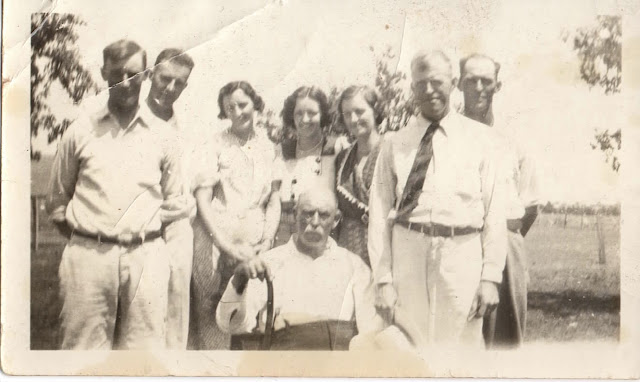 
William purchased 150 acres of land in Garrard County, KY in 1816. The land was located on the water of the White Lick Fork of Paint Lick Creek. It appears that this land was eventually sold by the heirs of William Clark in 1839. William made a will dated June 2, 1822 in which were mentioned his
father John Clark, his mother Milly Clark, his wife Sarah, and his sons John, Meredith, George and William. The will was recorded in July, 1822.


The will left his father John and his mother Milly the plantation where they lived including the farm with 40 acres of land, also half of the horse mill, likewise the sugar camp that they now make use of during their material lives. To his wife Sarah the balance of his plantation during her material life and after her death the property to be sold and equally divided among all his children except his oldest son John who is to only have $10 of his estate. His wife is also to have all his cattle, hogs and sheep, but the colt his son Meredith is to have. His wife is to have the household and kitchen furniture and at her death it is to be sold and divided among all his children except John. His son George is to have all his smith tools, and his son John is to have his whip saw. After the death of John and Milly Clark the 40 acres of land should be sold and William's two youngest sons, Meredith and William, should have $15 each more than the rest as an extra, the balance of the money to be divided equal with them and all the rest of his children. His wife is also to have one log cabin, two axes and one iron (?). The witnesses to the will were Coleman Haley and John D. Stephens.


ABOUT HIS FATHER JOHN CLARK

John Clark, like our John Farrell ,was seven generations back from mine. They lived only a few miles from one another in Kentucky. Each served in the Revolution as a fighter in the Virginia Continental Line. Details below are from Find-A-Grave.

The family moved to Madison County, KY by 1795 as evidenced by a deed dated Nov. 27, 1795 in which John purchased 502 acres of land from Robert Daniel. The land was located on the east fork of Sugar Creek, and was bounded in part by the land of Abraham Stephens. Apparently, this part of Madison County became part of Garrard County when it was formed in 1796.

John served as a regular soldier in the Continental Army in the Revolutionary War. John's application for a military pension in 1818 stated that he enlisted at Goochland County Courthouse in VA, in March, 1775, and that he served as a private in Capt. Samuel Woodson's Company of the Ninth Virginia Regiment on the state line commanded by Col. Thomas Fleming, and after Col. Flemings death that he continued to serve in this regiment until Col. George Matthews commanded it and until July, 1777. In 1776 the regiment was taken on Continental pay and establishment, and he served upwards of 18 months in the Continental line. John was in the battles of Brandywine and Germantown, and at Germantown was taken prisoner by the British and detained for 8 months and 12 days. He had a discharge afterwards from the hands of Gen. Muhlenberg at the Valley Forge of Pennsylvania, having served 4 months over the period of his enlistment. His discharge was "burnt up" with his house after he moved to KY.

John was 62 years old at the time his pension application was filed in 1818. His pension papers state that John was a house carpenter by trade, but from old age and a complaint called the gravel or an obstruction in the bladder, he was unable to do "little or no manual work labor". His wife was also 62 years old and incapable of labor from a disease called the leprosy.